Next on our working remotely in VR expedition was Rec Room, a recreational virtual and social space. Is it suitable for work or not? 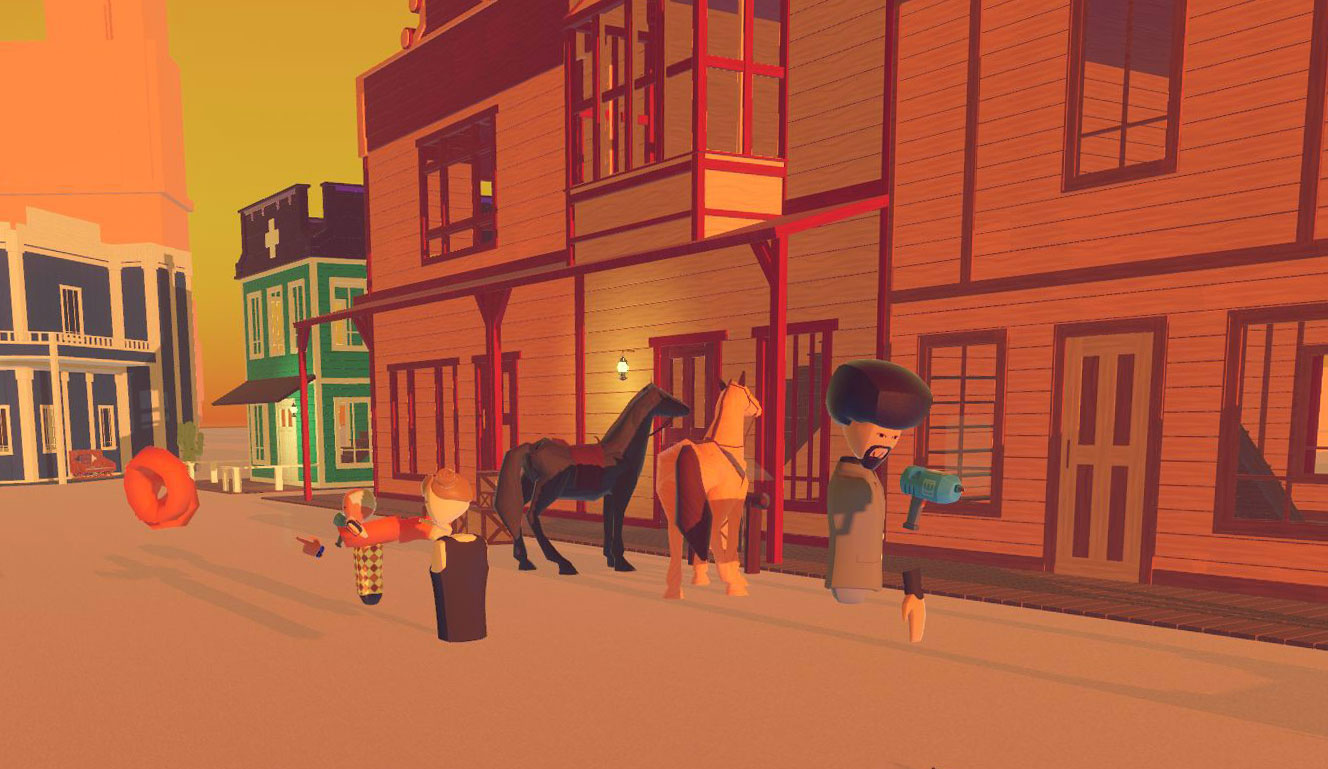 Next on our working remotely on different virtual reality (VR) platforms tour was Rec Room, a free recreational virtual space, where people can socialize and do various activities, such as play paintball or meet in a park. There are numerous ready-made sceneries to choose from, but maybe the most fascinating feature of Rec Room is the possibility of creating your own spaces. You can design and build unique virtual spaces by yourself or together with others.

Previously we have tried out and written about Glue, a virtual collaboration tool, and social platforms AltspaceVR, and Bigscreen VR. You can find all of these articles in the Working Remotely series.

Rec Room Inc. published the first version of their main title in 2016 for Microsoft Windows, but these days it is also available for Playstation, Oculus Quest and iOS. Rec Room can be used with any virtual reality headset through SteamVR, and to Oculus Quest it can be downloaded through Oculus store. It is also possible to use Rec Room in Screen Mode on your desktop, which means you can use it without any virtual reality headsets, too.

The main values of Rec Room are “When in doubt, build it”, “It’s a small world” and “Ready, fire, aim!”. These values mirror their ideas of creating over talking, no quick money milking from customers, and always trying new things based on customer feedback.

Getting to know Rec Room

We started our journey with Rec Room as with any other VR application: by downloading the app from its website / Oculus store, creating our avatars, and watching the on-boarding tutorial. We were happy to witness that the learning curve of Rec Room was super easy and straightforward, and even the first timers got on board with all the features in a second.

We started the testing with a group of five people, all with different VR headsets. The scene of our meeting was chosen from Rec Room’s scene library, so we didn’t exactly know what to expect. We found ourselves in a lovely western movie scene, where we instantly started to try out all the features and tools Rec Room offered us.

The first things we tried out were, of course, different hand gestures, emojis and camera (it is always fun to take pictures of your coworkers in virtual reality!), but the main tool in Rec Room is called the maker pen. With the maker pen everyone can create 3D objects or pull out ready-made objects and set them into the existing room. It’s also possible to add animated and interactive elements to the rooms with the maker pen, and these interactive elements allow people to make different games in the room.

Unfortunately, our Oculus Quest user were left out already at this point, as the app drained the headsets power from 100% to 0% in less than an hour. Just to be sure, we later tested Rec Room with other Oculus Quests as well, and the same thing happened. The battery drainage with Oculus Quest is a sad fact, but very important to be noted – especially if you are planning on using Rec Room with the Oculus Quest headset!

Despite of Oculus Quest, all other setups worked like a charm. 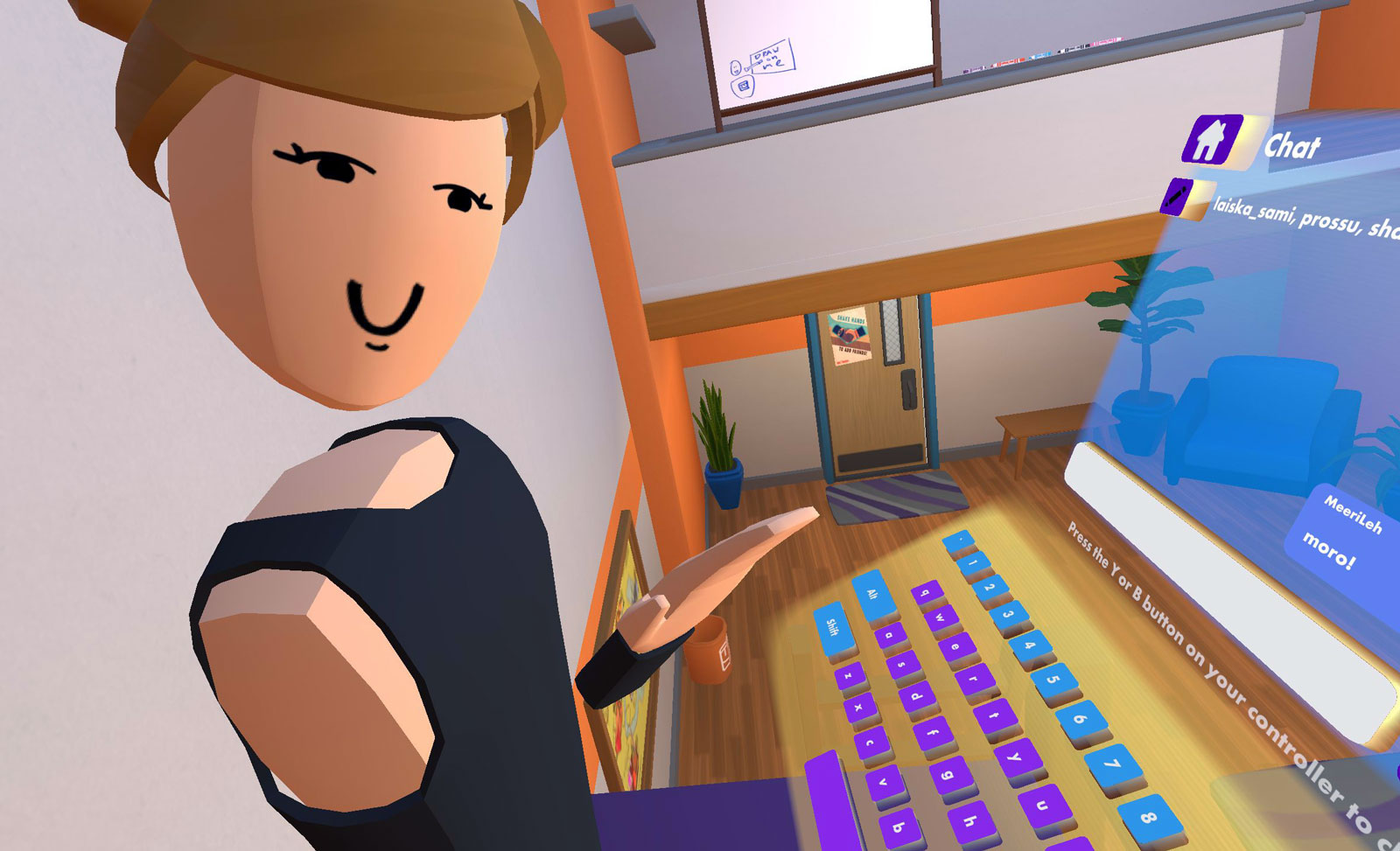 In Rec Room it is easy to invite friends to join your team in the current space you’re in, and chat with the messaging tool. You can also easily move to other spaces, or switch to gaming whenever you like.

In multiplayer games, Rec Room demonstrated its best purpose. We tried out laser tag and paintball games, from which paintball turned out to be our absolute favourite game. It was great to see that playing these multiplayer games didn’t require a gaming laptop, as everything worked smoothly with a regular work laptop as well!

After a while of messing around and playing games, we tried to find some tools to use in a working environment. In a quick glance we found a drawing board, but nothing else to work on.

As Rec Room isn’t created for meeting use and it doesn’t have ready-made tools for work, we definitely recommend it first and foremost for multiplayer gaming. Workwise this could mean playing virtual paintball at recreation evenings and other events with your coworkers.

We also think that smaller business meetings could work in Rec Room, if you make your own scene and think of the right instruments that you need, and create them. The multiplayer drawing board was very handy, but you might need more to work on. It is also very important – like in all VR meetings – for the host to lead the meeting and be careful in choosing to whom you give the host privileges to, so that the meeting will keep on the right track.

All in all, Rec Room might work well for meetings, but creating and choosing the right scenes and tools need to be done beforehand. If you’re feeling creative, choose Rec Room!