We are trying out remote working tools of AltspaceVR, one of the most prominent current social VR platforms. Is it also suitable for work? 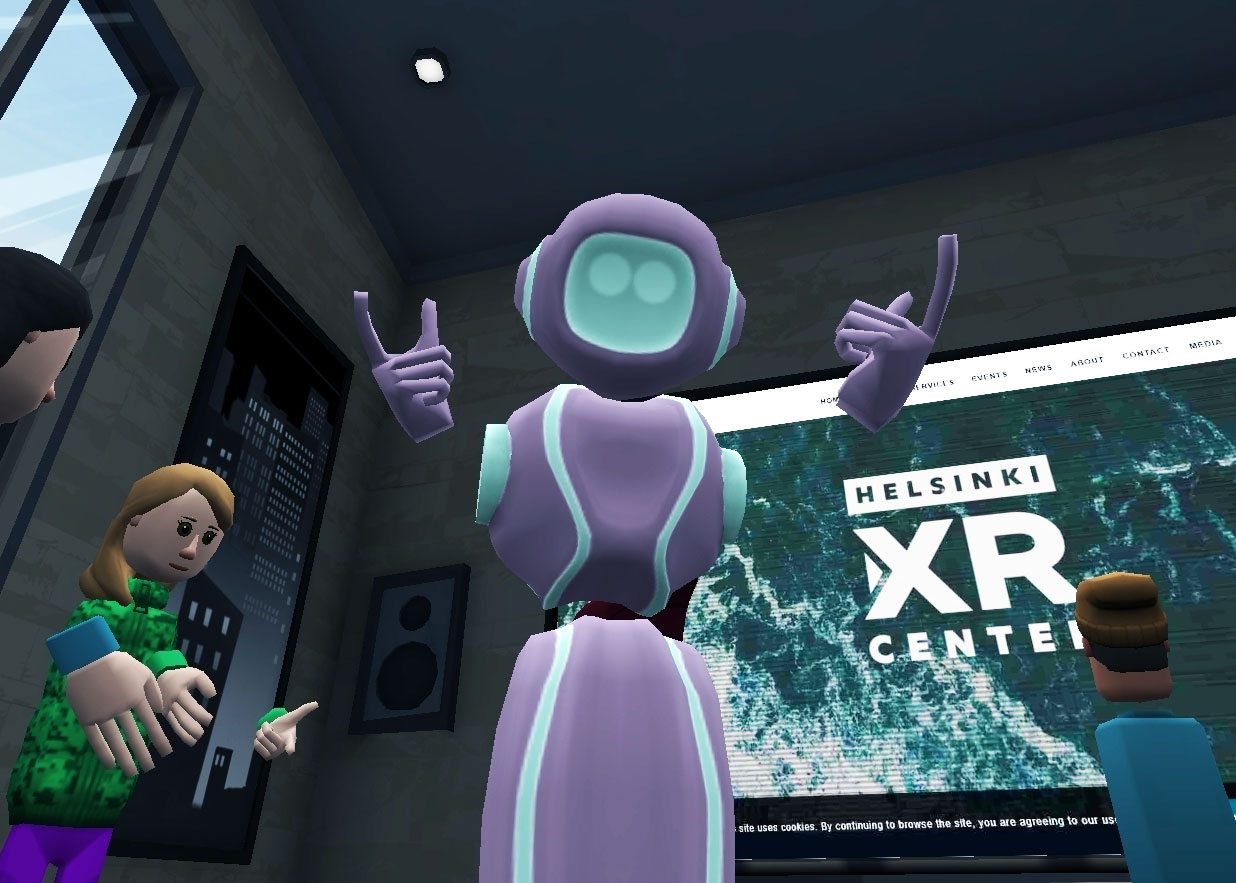 Next up on Helsinki XR Center’s working remotely on different virtual reality (VR) platforms tour tour is AltspaceVR, one of the most prominent current social VR platforms in the world for hanging out with friends and enjoying virtual events.

AltspaceVR was launched in 2015 before the first consumer VR headsets of this generation were even released. After raising some 10 million USD in venture capital, Altspace was left in the shadow of boundless open-source community creation and meme mayhem focused VRChat, activity and games based RecRoom and virtual reality cinema and binge watching service Bigscreen.

In 2017 Microsoft came to the rescue and acquired Altspace, ensuring its survival. A paradigm shift in strategy was also introduced, as Altspace has started focusing increasingly on creator hosted events, such as comedy nights, talk shows, workshops, dance parties and educational content from language courses to programming. Even VR Church, apparently the first church existing only in VR, has found its home there.

Microsoft has stated that they believe VR has the power to become the next big influencer platform, and reinforcing Altspace’s capabilities in virtual event hosting is one way to ride that future wave.

With all this on our minds, Helsinki XR Center wanted to try if Altspace could also be a fruitful VR platform for remote work. It is available for all PC VR headsets, but also Oculus Quest, Go and Samsung Gear VR, as well as support for desktop access on PC’s.

Altspace and Glue, the remote collaboration software we tried earlier and wrote about in our previous blog, have very different features when it comes to remote working. Understanding the difference between a VR collaboration software like Glue and a social VR platform like Altspace is important for expectation management.

Collaboration software obviously has a greater emphasis on collaboration tools and features but comes with a licence fee, whereas Altspace and other social VR platforms are free to use and open to all but have less “serious” features. They are mostly meant to facilitate virtual get-togethers and having fun with friends. Keep this in mind when comparing different applications and trying to find the one that suits your needs best. 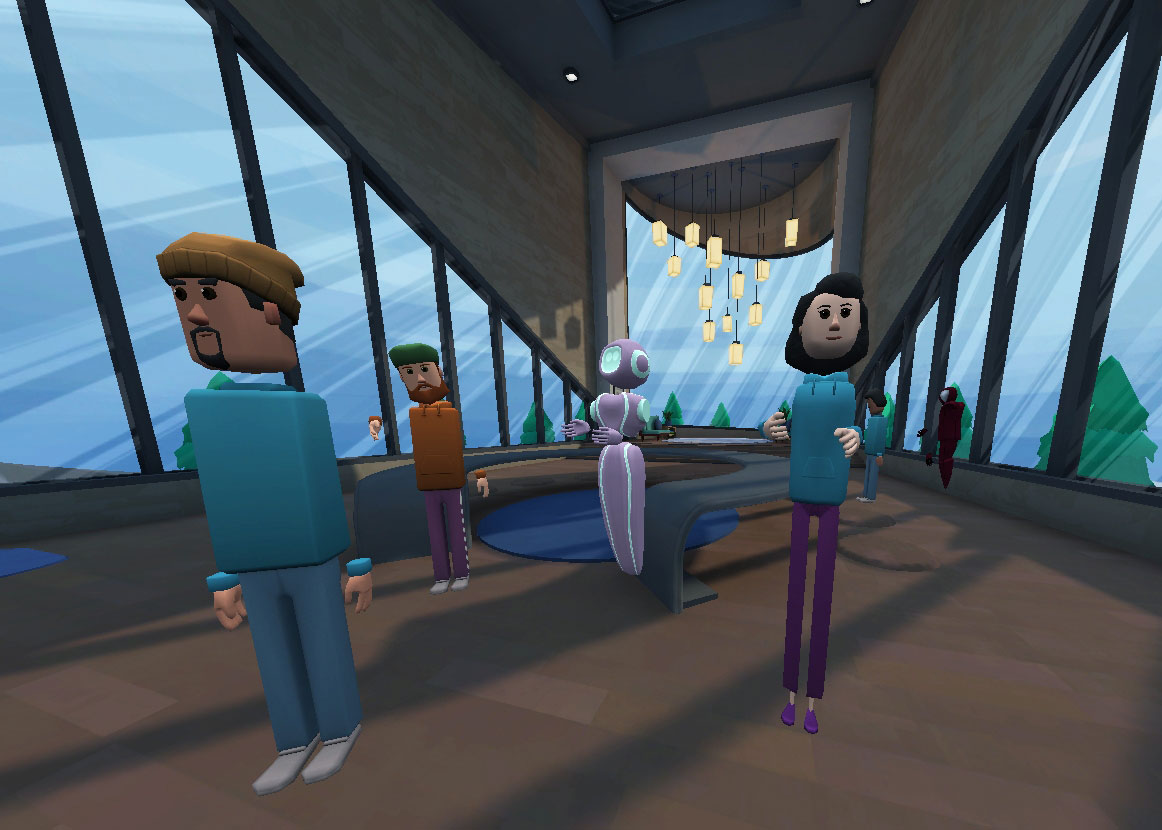 Our insights on AltspaceVR

Organising and sharing an event with Altspace is easy. Anyone can create their free credentials on Altspace’s website, after which one can schedule an event with a few clicks. Privacy settings between public and private events are easy to manage. The event link can be shared easily anywhere, and people who have their own Altspace credentials can just click it and sign up for access.

After launching the Altspace application and logging in with your personal account, you can browse public and private events. Your personal events are on a separate tab and finding them is easy. One problem we encountered is that if a private event that you want to attend has already started, you cannot add it to your personal list anymore. This means that you cannot find the particular event from your headset’s menu, making it impossible to enter the event. We had to create another instance of our virtual space in the middle of our meeting because of this, and it remains uncertain whether it was simply a bug or a feature.

Altspace’s toolkit has clearly formed around presentations and other kinds of talk programmes. Each event can have host and moderator roles, which give sort of organisational superpowers. Hosts can for example:

Since Microsoft has acquired the platform, we can only hope for an integration of Microsoft Office and Teams, which would expand Altspace’s capabilities significantly and offer the best presentation tools currently available in VR. If this happens, Altspace could also offer a license model with these features for professional organisations.

Our team’s favourite features of AltspaceVR

All in all, we really enjoyed using AltspaceVR, and we think it’s good for both work and fun. For companies Altspace is a great tool for arranging virtual events and panel discussions to reach more audience, as well as internal meetings or announcements. The fun side is that you can also arrange more casual events such as parties and get togethers with your team remotely. Playing games or watching videos and listening to music is a great way to bond and lift up the team spirit, even in virtual reality!

We recommend everyone to explore the possibilities of AltspaceVR, and see whether it’s suitable for your virtual event or meeting arrangements.