This creative duo wants to capture stories of lonely people, such as the elderly, and bring them to different audiences using new platforms.

Today we are introducing Unfold Stories!

We are trying to make an Augmented Reality (AR) experience that will tell stories about the older people of Helsinki. The plan is to make it accessible for everyone and make it work with mobile phones. It will be part of a campaign to prevent loneliness in old age, promoting older people’s life’s stories.

We are still trying to find the best way to approach the project. We want to be sensitive about the topic so that’s why now we are trying to contact social organisations to help us shape the project in the right direction.

Since the beginning we wanted to develop a project that would have had a social impact in our society. We certainly didn’t want to make something just entertaining. By taking advantage of the technology, we want to bring stories of people into a new dimension and make them sharable and visible for everyone.

For instance, we want to capture the story of lonely people, such as some of the older community, and bring them to different audiences using new platforms.

Loneliness is a social issue that affects more and more people in our society. The range of people who suffer from loneliness is very wide and it affects especially older adults.

The goal of this project is to raise awareness about loneliness through a campaign using Augmented Reality (AR). By doing so, we believe that people will have a better understanding of this social issue, it will create a dialogue around the subject and hopefully this will trigger initiatives to fix the problem.

Tell us a little bit about your team members!

We are 2 people, Lucio Celomundo and Riccardo Pizzuti. More people might be involved in the future, if needed. Generally we will help each other to develop the project further and will work on specific tasks whenever needed.

LUCIO: I have a background in sound and video, specifically sound design, recording and mixing and also electronic music. For video, I have a background specifically in production, direction and editing of short-films and video art. I usually work as an independent freelancer or with the company ‘Magnetic Giraffe‘, which I started in 2012 in London with my friend Bill Cargill.

So in the project ‘Unfold Stories’ my role will be mainly production but also if needed I will do different creative and technical tasks specially related to the sound and video aspects of the experience (depending on the elements that are needed).

RICCARDO: I have a background in design and visual communication. I have been working mostly as a freelancer designing websites, brochures, posters, logos and 3D visualizations for different kind of projects. I have also been working with Lucio in several audio visual projects such as “Knives Don’t Rust Indoors”, “Kide Science” and “Exquisite Vessel”.

My task in Unfold Stories will be mainly taking care of the visual communication of the project and also, when needed, helping Lucio with other tasks not necessarily close to my expertise. 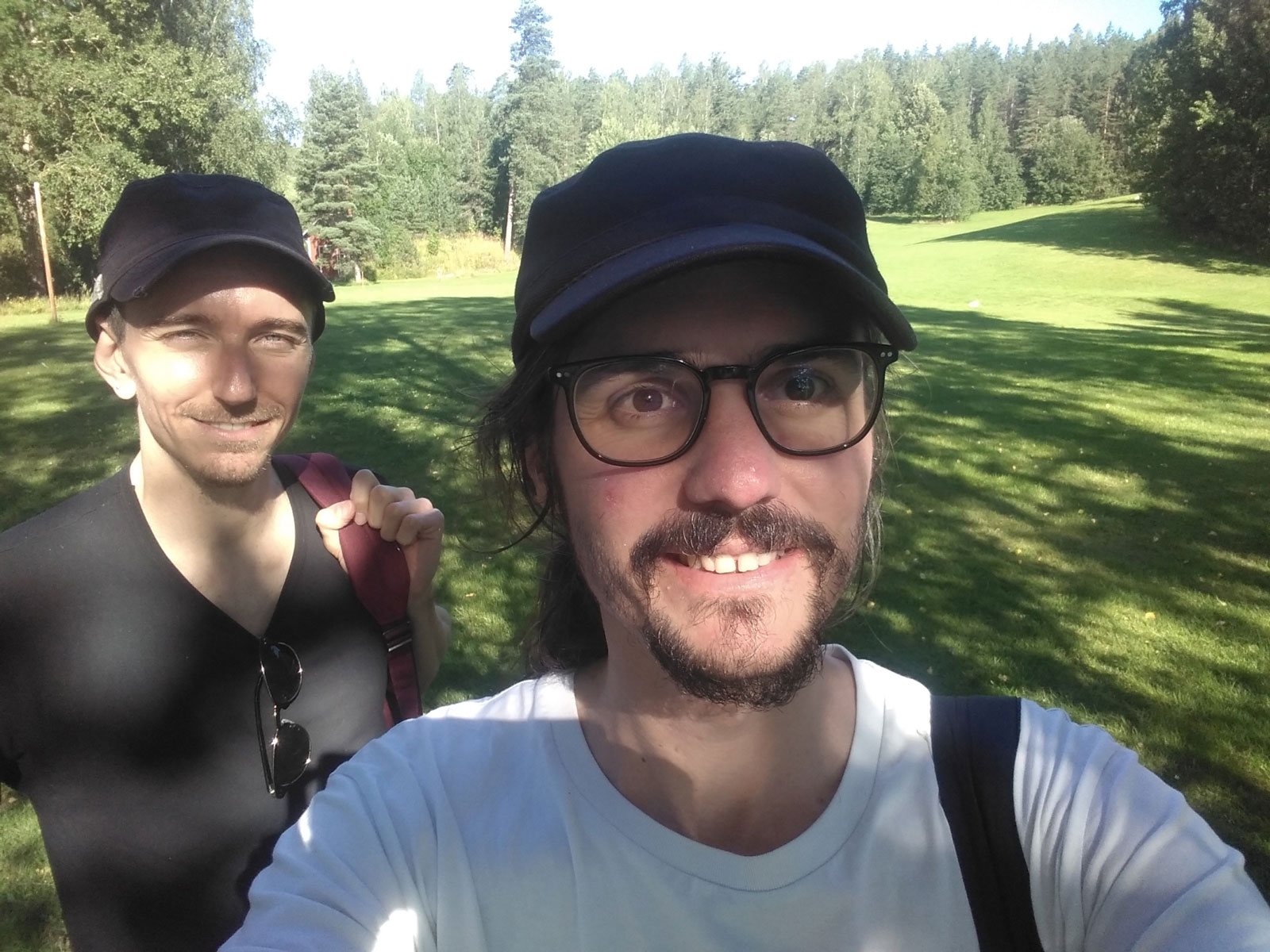 Unfold Stories’ both team members, Riccardo (on the left) and Lucio (on the right).

LUCIO: I have just graduated from my MA in new media design and production at Aalto university. Now I am finishing a couple of short-films and soon I will be starting the production of my 2nd chapter for my project Exquisite Vessel. This project deals with our perception on death and it uses different immersive media such as fulldome cinema and VR180 filmmaking.

RICCARDO: I am currently working at Stereoscape as technical advisor on Reflekt products. Together with Lucio, I am also a member of the ambient – electronic band Ansaritie.

We found the XR Center an interesting hub for projects related to virtual and augmented reality. The XR Center gave the opportunity to people to apply and be part of the hub.

We thought that it was an opportunity for us to challenge ourselves by developing an interesting project, learning new things, meeting people involved in the area of work, and getting to know the field from a closer perspective.

We started in March but due to COVID-19, the project had to be postponed. After this long break, we are now (if the global situation allows) ready to take the first steps and start working on the project Unfold Stories.

Since 2017 we have been active and involved in several projects of different nature. For instance, the band Ansaritie (ambient – electronic music project), and various audio-visual projects that we have worked together.

Due to Covid-19 we didn’t have the chance to do much, because the crazy global situation kicked in just when we started!

We just participated in one meeting, where we were introduced officially to the hub and got access keys. We had a very good impression of the environment and also from the people involved.

We believe that extended reality is a great tool to make engaging experiences and shift the perception of reality into new points of views. Thanks to this new technology, it’s possible to push the boundaries of perceptions and create new realms.

It also allows us to communicate in a very different way, compared to what we are used to.

Furthermore, as a new technology, extended reality has not been completely explored yet. This makes us see a great potential in it! We are also eager to learn more in depth the different elements of this technology. For all these reasons we are excited about working on projects using these new tools. 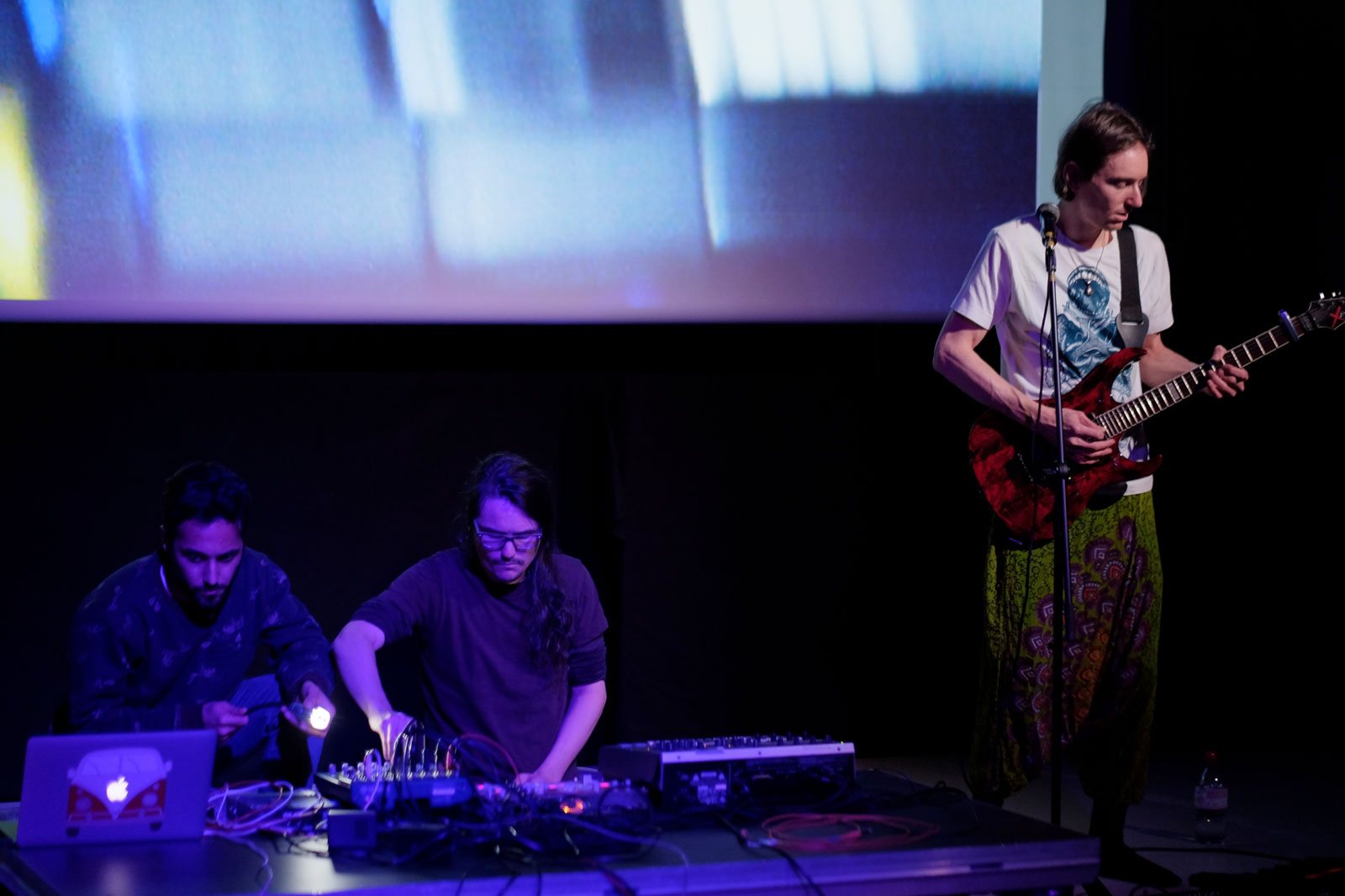 A picture of the ambient-electronic band Ansaritie performing, of which Unfold Stories’ both members Lucio and Riccardo are a part of.