Steven M. Lavalle – Professor of Computer Sciences and Engineering (Robotics & VR) and Early Founder of Oculus VR, gives a keynote speech at Match Up 2019, the biggest XR event in Finland. 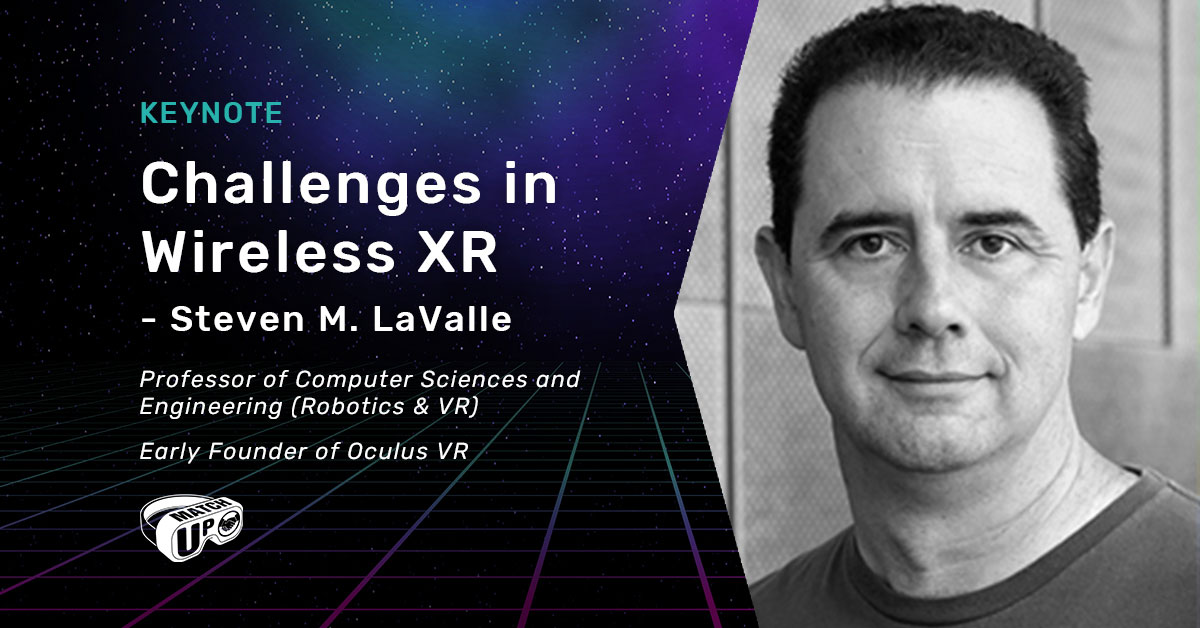 Professor Steven M. Lavalle gives a keynote speech on the challenges in wireless XR at Match Up 2019, the biggest XR event in Finland.

Steven M. LaValle is a Professor of Computer Science and Engineering, in Particular Robotics and Virtual Reality, at the University of Oulu. From 2001 to 2018, he was a professor in the Department of Computer Science at the University of Illinois. He has also held positions at Stanford University and Iowa State University. His research interests include robotics, virtual and augmented reality, sensing, planning algorithms, computational geometry, and control theory.

In research, he is mostly known for his introduction of the Rapidly-exploring Random Tree (RRT) algorithm, which is widely used in robotics and other engineering fields.

In industry, he was an early founder and chief scientist of Oculus VR, acquired by Facebook in 2014, where he developed patented tracking technology for consumer virtual reality and led a team of perceptual psychologists to provide principled approaches to virtual reality system calibration, health and safety, and the design of comfortable user experiences.

From 2016 to 2017 he was Vice President and Chief Scientist of VR/AR/MR at Huawei Technologies Co Ltd. He has authored the books Planning Algorithms, Sensing and Filtering, and Virtual Reality.

Virtual reality, and all of its cousins, works by designing perceptual illusions that trick the human senses. It can be considered as a form of perception engineering, because it is a human experience that is being engineered through artificial stimulation. In this area, there is a strong need for wireless, distributed computation because a wearable display should be as light as possible while avoiding wires that could ensnare the user. This talk will highlight some motivating use cases, which seem to require outrageously high performance from wireless networks. A key to the future may be to formulate network quality measures based on human perception in the context of virtual reality use cases. In this way, coding methods and network architectures are optimized around maintaining the desired engineered illusions, without network-induced side effects such as fatigue, nausea, and presence-destroying distractions.